Quebec will compensate cab drivers and taxi companies who have seen the value of their permits plummet with the advent of Uber with cheques of up to $45,700 for each permit they own, the government announced Friday.

The payout, part of a $250-million aid package announced by the government in March, represents roughly 56 per cent of what permit owners have lost, the government said.  At the same time, the Finance and Transport ministries announced $18 million in funding to help the taxi industry modernize and keep pace with their online competition.

“The diversification of services offered and the change in behaviour of consumers has created drastic changes in the transportation of people,” Finance Minister Carlos Leitāo said. “The situation has had repercussions on taxi drivers, on the owners of permits, their families, and we are very conscious of that.”

Leitāo said the decision on compensation came after months of talks with industry members, and he expected permit owners to be satisfied. Quebec is the only jurisdiction in Canada and one of the few worldwide to offer payments, Transport Minister André Fortin noted.

Taxi drivers said they were happy to receive compensation, but noted that the payments did not cover their total losses or address the fact an unregulated ride-sharing industry is destroying their livelihood.

“We all expected $30,000, we’re getting $45,000, but it really doesn’t make a difference,” said George Boussios, president of Champlain Taxi and spokesperson for Taxis du Grand Montréal which represents taxi company owners. “Our main concern is Uber. When you’ve lost $120,000 minimum on your permit, and … we’re getting $45,000, I don’t think it will make a difference.

“It will help people that are struggling, it will help people on the brink of bankruptcy, and they’ll take it because they need it, but … the main question here is what are they going to do about Uber, and I got no answers.”

Many drivers took out mortgages to pay for their permits, and had planned to sell them to fund their retirements, Boussios noted.

Drivers say the government should either pay the full worth of their permits, or level the playing field by forcing Uber drivers to meet the same requirements taxi drivers do.

Amir Khadir of Québec Solidaire said the Liberals were using $250 million of taxpayers’ money to pay for their inaction on Uber.

Under the compensation plan, permit owners working in Montreal will be eligible for the highest amounts, as their permits saw the most dramatic drop in values. Only taxi drivers operating in the regions of Montreal, Quebec City and Gatineau will qualify for larger payouts, ranging from $3,800 to $45,700. Taxi permit holders in other sectors of the province that were judged to have been less affected will receive cheques for $1,000, as long as they held a permit on March 27, 2018. The payouts will be considered a capital gain as opposed to revenue to reduce taxes.

In Montreal, the owners of roughly 4,500 permits will qualify for the maximum amount. The money will go to drivers who held a permit between April 1, 2014, when values started to dive, and March 27, 2018. Those who had the permit for less than four years in that period will be paid a percentage.

The permit system was set up by the government decades ago to control the number of taxis. Worth about $50,000 in the late-’90s, their value soared to an average of $214,000 by 2006. Since the government created the system, it has an obligation to pay drivers for their losses, Fortin said in the past.

Asked why it’s only paying drivers 56 per cent of their permit values, Leitāo said the government had decided on an overall package of $250 million “which is not an insignificant sum,” and had to work within those parameters. Further payouts could happen in the future if the situation warrants, Leitāo said. The current payment plan is guaranteed, even if the Liberals don’t form the next government. Permit owners will be notified in the coming days, and should have their payments by October.

Taxi industry officials would like to see the government put a cap on the number of Uber drivers permitted in a certain territory, and to tax Uber on its revenues. The number of licensed taxi drivers in the Montreal region has fallen from 11,600 before Uber came on the scene in 2014 to less than 8,000 today, Boussios said. Uber has said it has about 5,000 drivers in Montreal, but many do not work full time. Leitāo said a provincial tax is now added to Uber fares, and the company has to advise the government of its drivers’ revenues so they can be taxed. Proceeds from Uber rides are also funding the government’s $18-million modernization program, under which taxi drivers can get $8,000 toward the purchase of an electric vehicle and $3,000 for a hybrid car, on top of other provincial subsidies. Funding will also go toward technological improvements like mobile platforms and websites, and putting branding logos on cars. 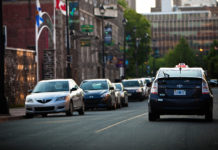 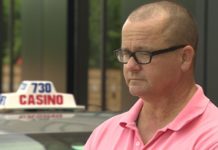 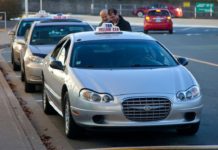 Taxi drivers are ready to sue Halifax if major reform goes ahead. Here’s why

Reality and Risks of Uber

ABOUT US
Driver's Voice is a platform for the professional drivers of Nova Scotia who work in the Taxi and Limousine industry.
Contact us: info@driversvoice.ca
© 2018 Driver's Voice